Journal of magnesium
and alloys 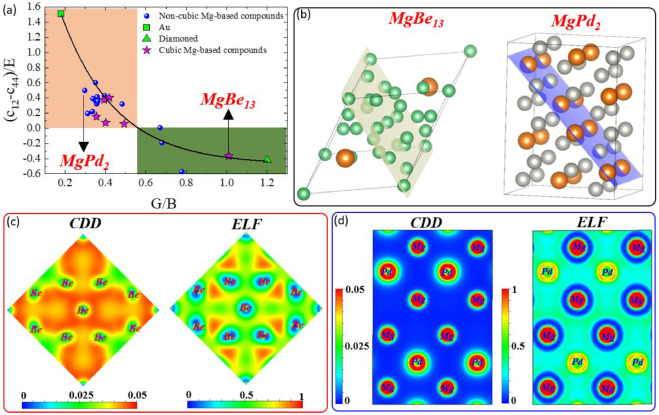 In the present work, we have employed machine learning (ML) techniques to evaluate ductile-brittle (DB) behaviors in intermetallic compounds (IMCs) which can form magnesium (Mg) alloys. This procedure was mainly conducted by a proxy-based method, where the ratio of shear (G)/bulk (B) moduli was used as a proxy to identify whether the compound is ductile or brittle. Starting from compounds information (composition and crystal structure) and their moduli, as found in open databases (AFLOW), ML-based models were built, and those models were used to predict the moduli in other compounds, and accordingly, to foresee the ductile-brittle behaviors of these new compounds. The results reached in the present work showed that the built models can effectively catch the elastic moduli of new compounds. This was confirmed through moduli calculations done by density functional theory (DFT) on some compounds, where the DFT calculations were consistent with the ML prediction. A further confirmation on the reliability of the built ML models was considered through relating between the DB behavior in MgBe13 and MgPd2, as evaluated by the ML-predicted moduli, and the nature of chemical bonding in these two compounds, which in turn, was investigated by the charge density distribution (CDD) and electron localization function (ELF) obtained by DFT methodology. The ML-evaluated DB behaviors of the two compounds was also consistent with the DFT calculations of CDD and ELF. These findings and confirmations gave legitimacy to the built model to be employed in further prediction processes. Indeed, as examples, the DB characteristics were investigated in IMCs that might from in three Mg alloy series, involving AZ, ZX and WE.